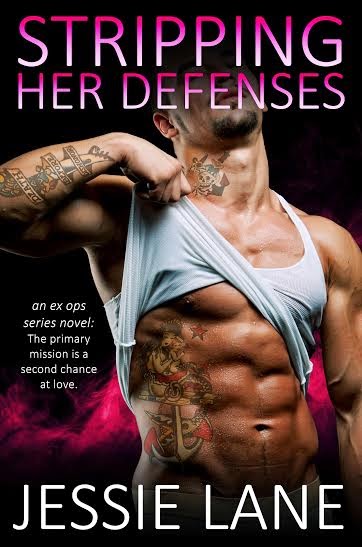 He can’t change the scars on her body… but fate will give him a second chance to mend the scars he put on her heart.

Riley Sullivan and the Ex Ops Team are headed to Miami undercover… as bikers. Following up a lead, the men will perform their investigation acting as members of the Regulators Motorcycle Club with the club’s permission. Surrounded by hardcore bikers and investigating missing strippers, Riley finds the last person he ever expected to see again—his ex-wife.

Kara Sullivan left the man she loved after a tragic accident cost them their unborn son. After years of therapy, she’s come to grips with the loss and has re-emerged from the pain a brand new person. That doesn’t mean she’s ready to face the man who inadvertently broke her heart, and who she’s hurt in return.

Riley has never stopped loving her and he never will. He’s ready to fix their marriage and move on with their lives, however Kara’s reluctance to renew their relationship isn’t their only problem. Danger lurks just around the corner… and there’s a chance she could disappear permanently.

OMG. I loved this series. I was hooked from the beginning. This is a story of  childhood sweethearts, second chances and  heartbreak. This is the second book in the Ex Ops series. And this is Riley and Kara's story and what a story.  This is your warning this story is HOT and will pull at your emotions.

Riley is in the forces and when he's home he volunteers for more work. Kara has low self esteem, and tragic consequences lead to their split. And Riley is never the same.

This book like the special forces these guys come from is action packed, explosive. It will capture your attention from the beginning. I love Riley and Kara's character's. I think Jessie has written their story beautifully.

You know I don't do spoilers and this one is no different. This story is amazing. And I really recommend you not only read this but all the first one Secret Maneuvres.

This book is gripping, exceptionally written. Has a stunning and entralling story behind it. I cant wait for the next one. I read this one in one go.

I was so focused on her, so oblivious to everything else, a bomb could have gone off right
next to me, and I would never even have known to kiss my ass goodbye.
This had happened only one other time in my life.
The first time I’d laid eyes on Kara.
I didn’t know who the fuck this woman was, but I knew what she was about to become.
Mine.
All fucking mine.
A sick, twisted part of me mocked how much she looked like my Kara: same tanned skin
with that subtle red undertone, same dark brown hair color and molten chocolate eyes. Did it
really fucking matter, though?
Mission or no mission, I would make this woman mine in every way that counted while I
was here. I could figure out the future later. Fate didn’t hand you moments in life like this so you
could fucking ignore them.
She must have felt my eyes on her because, all of a sudden, she got this adorable little
furrow between her brows and shifted her gaze to see the room behind her in the mirror. That’s
when her eyes locked with my own and she gasped, dropping her lipstick. Twirling around on
her high heels, one of her hands reached up to cover the area of chest over her heart, and a
strangled sound left her throat. Taken aback by her reaction, I was about to apologize for obviously scaring her when I
hadn’t meant to, but Lucas’s voice rang out from down the hall before I could open my mouth.
“Yo! Sullivan! Bring your ass down here and stop checking the girls out.”
I turned my head in Lucas’s direction as I flipped him the bird, but I was again cut off by a
voice before I could tell him he could shove it up his ass. Only, this time, the voice that
interrupted me was soft, feminine, and one I heard every night in my dreams.
“Riley?”
Motherfucker.
That scantily clad stripper was my goddamn wife!

She lives in Kentucky with her two little Rock Chicks in the making and her over protective alpha husband. She has a passionate love for reading and writing naughty romance, cliff hanging suspense, and out-of-this-world characters that demand your attention, or threaten to slap you around until you do pay attention to them.

Loosely attached to Chelsea Camaron's Hellions Series and Jessie Lane's Ex Ops Series.
She's an investment banker. He's an outlaw biker. A little bit of heaven is about to meet a whole lot of hell. Morgan Powell was raised to be perfect, to set an example for her sisters to follow. Her life has been dedicated to making something of her career, so she wouldn’t know what to do with a man even if you gave her an instruction manual. Brett 'Ice' Grady spends his days trying to keep up with his teenage daughter, his nights consumed in Regulators’ MC business. He has no time for anything more than a casual hookup. Two worlds collide when the dangers of his life crash into the calm of hers. Can she go beyond her own boundaries and chip her way through to the man known to be as cold as ice?